A dream is a wish your heart makes

Mondays are a little busier than the other days of the week.  A routine has developed over the past six months that assures some basics get done around the house. 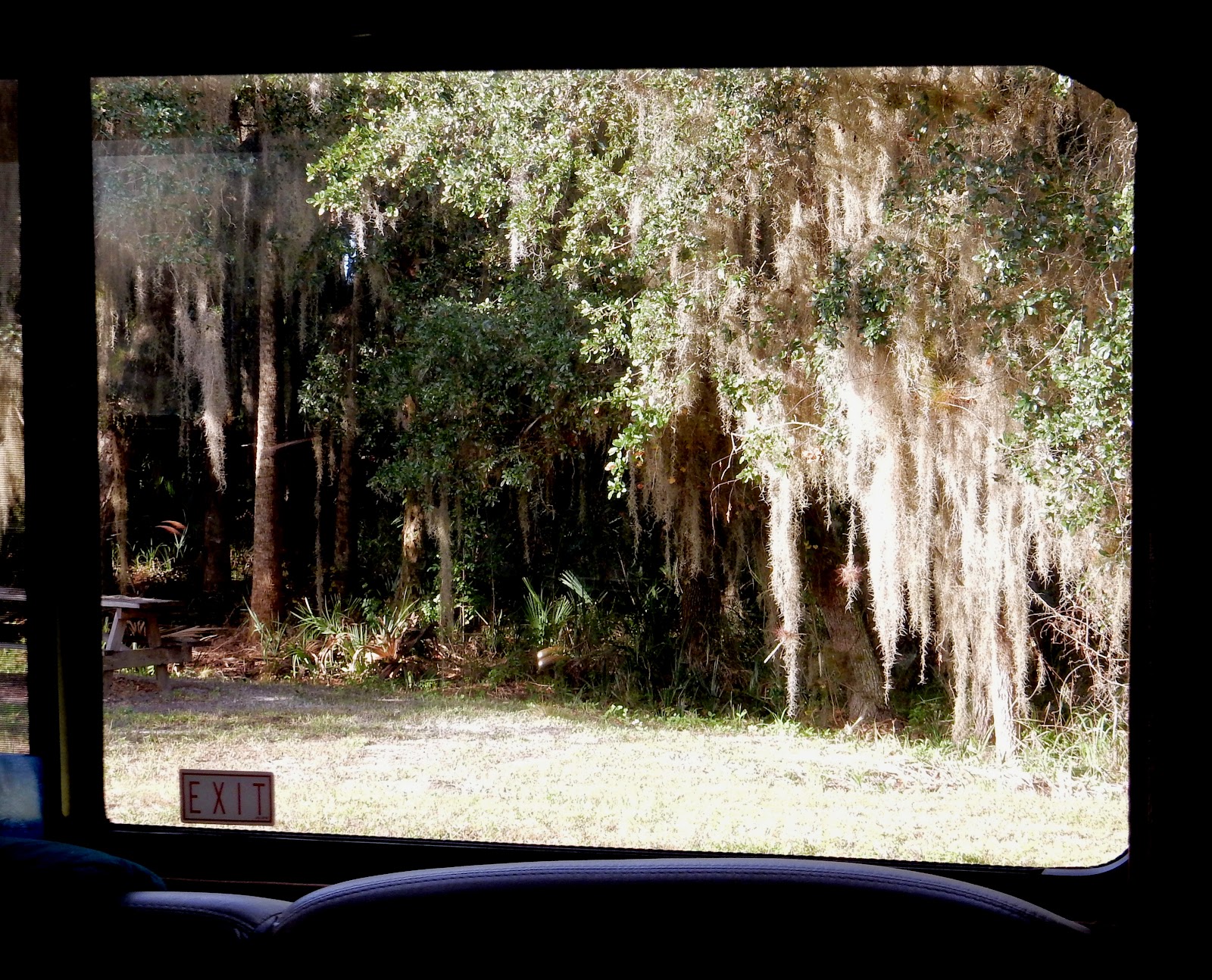 First, like most mornings, I rise first, make a cup of coffee and relax with my book and whatever the view is out our port bay windows.  This morning its the swamp behind the church. beautiful!

After breakfast I check all the vehicle and generator fluid levels, the ten tire pressures, and  the eight wet cell distilled water levels. The last is easy, since there is an electric pump that fills all eight from one tank. 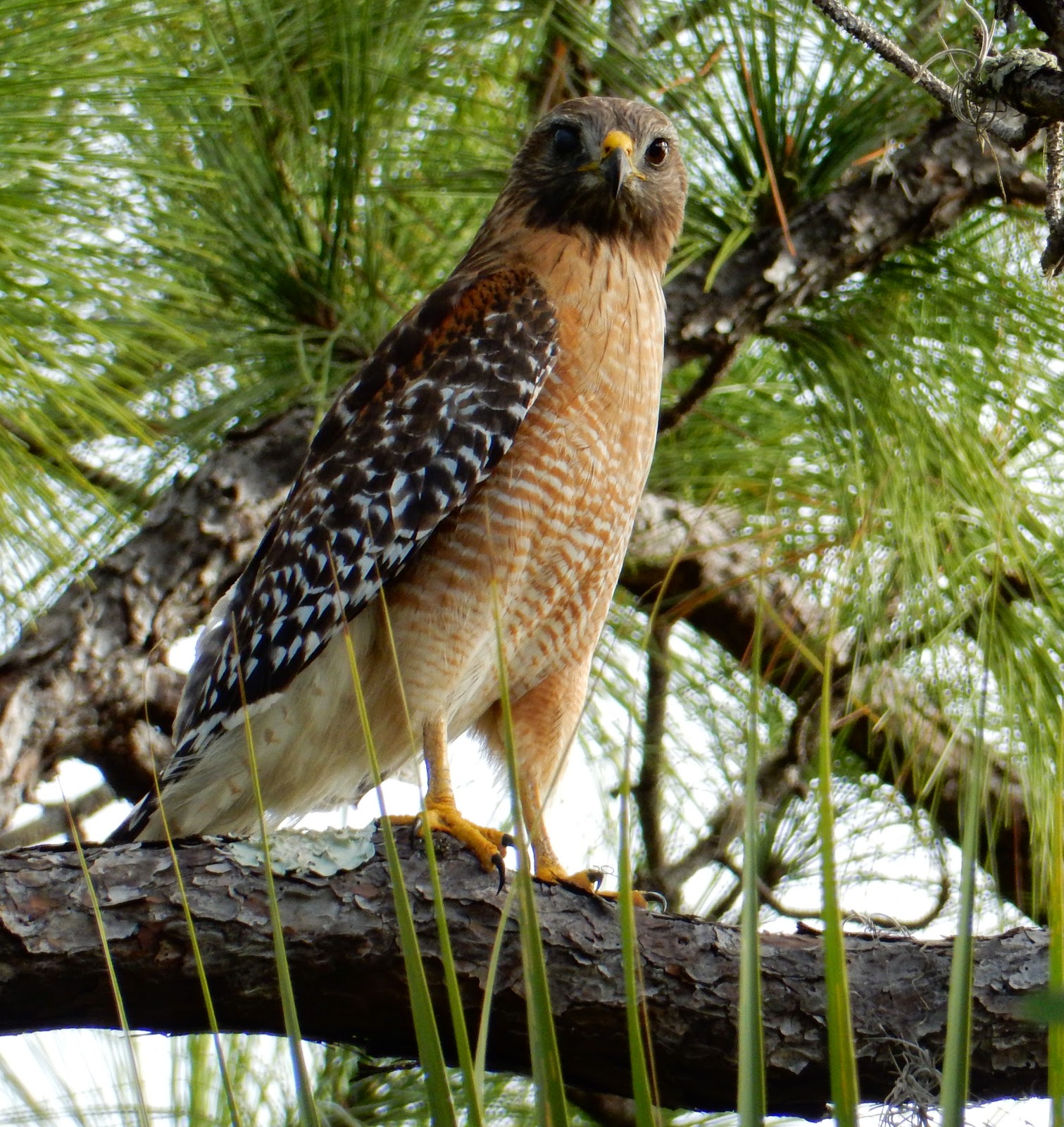 While I was outside two huge hawks (redtails?) dove across the coach and landed nearby.  Beautiful! 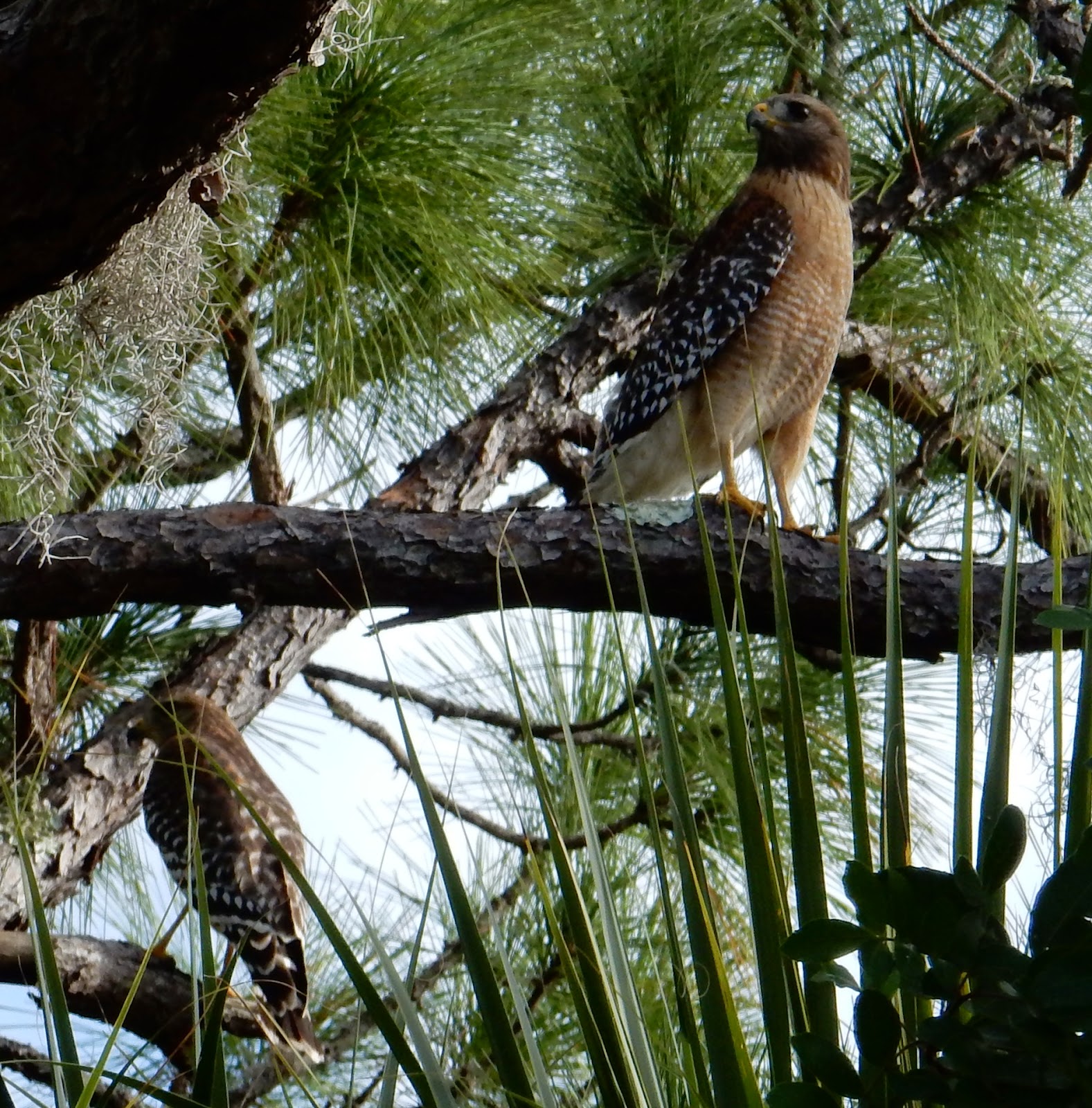 Housecleaning happens when its obviously needed and doesn’t take too long when we do it.  We each dust what we see that looks dusty when we see it, and the same goes for the vacuuming, which is made extra simple with the Dirt Devil wall vac.  The hose reaches every nook and cranny in the coach.

Today was the first of the month so Mona had some paperwork to attend to and I updated the Coach Ran McNally GPS online. I update the 500 gig Toshiba backup hard drive we store in the car each Monday to be sure we don’t lose pictures, etc, if the laptop drive fries.  We use my old office DELL that has 300 gigs of hard drive and a new keyboard we replaced before we left Pennsylvania. Mona loves her Windows SURFACE pad.  Simple, gits it done. 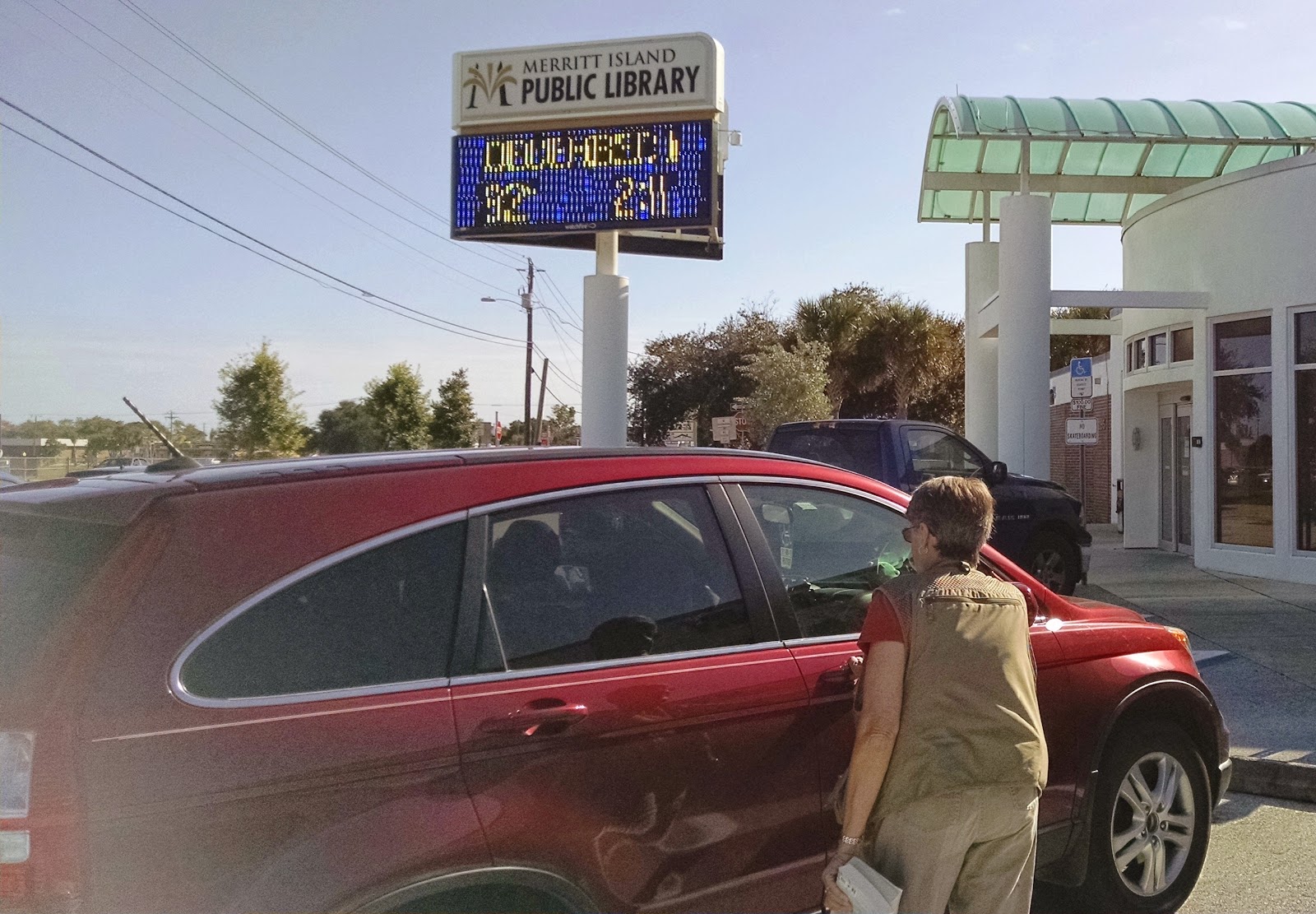 We had a good lunch and headed out to Goodwill in Cocoa for a new pair of shorts for me and a look at their books for Mona, then the library where she found two books, and finally the Laundromat for our weekly garment and bed cleansing. 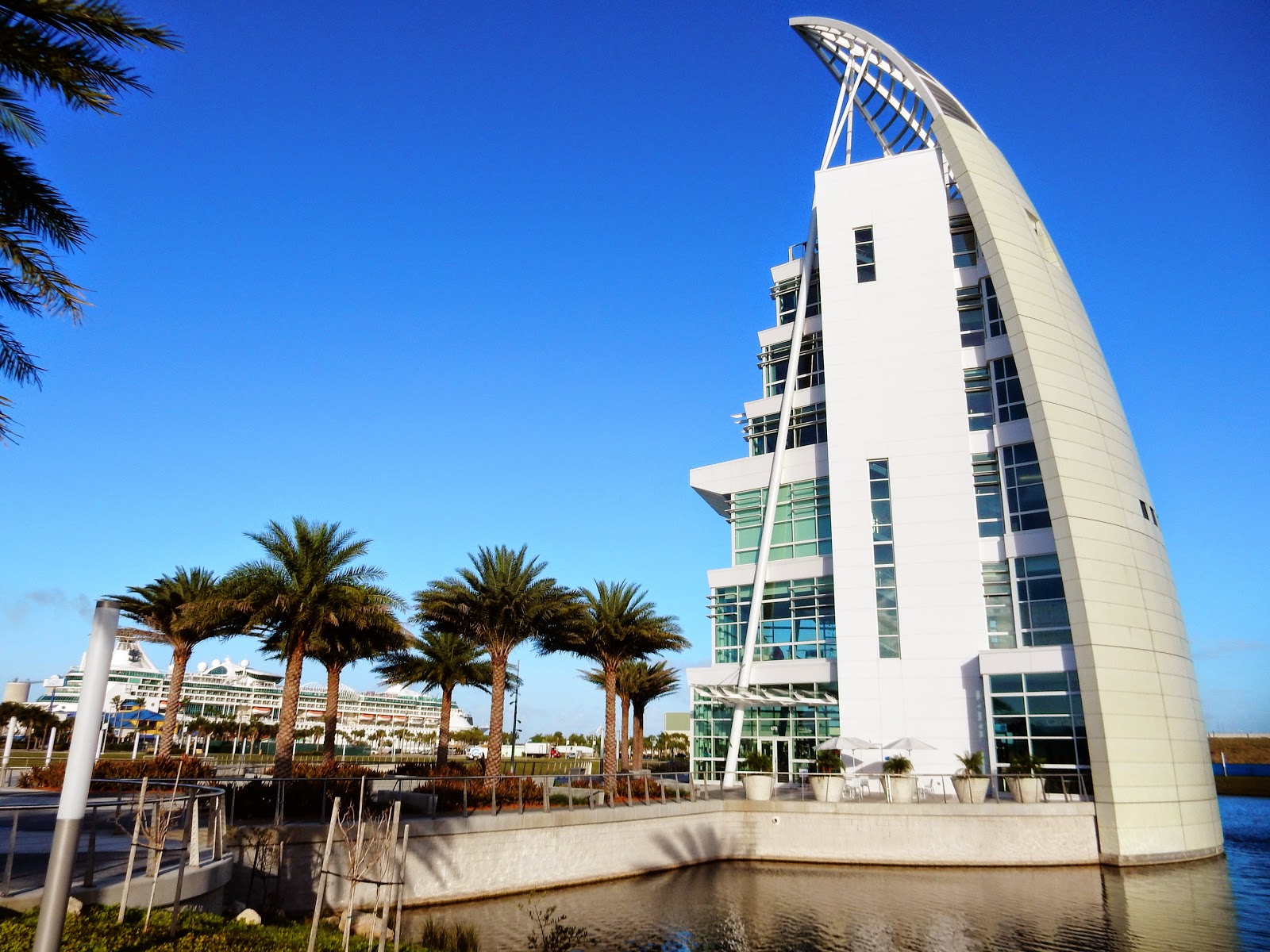 It was about 2 pm when we finished and headed for a new-to-us attraction at Port Canaveral.  The Exploration Center is a seven story building that overlooks the three cruise ship docks, naval supply area, and all of Cape Canaveral Air Force Station.

Its futuristic design is interesting, and the top deck is great for watching space launches but as a museum its more of a visitors center for Port Canaveral itself.  I remember when Maurits Van der Woude showed us Port Rotterdam some years ago.  They have a building a bit like this to, but its just for the radio and ship guidance control for that huge port.  This place had two container cranes.  But, as I said, its an interesting place to see cruise ships and launches from. 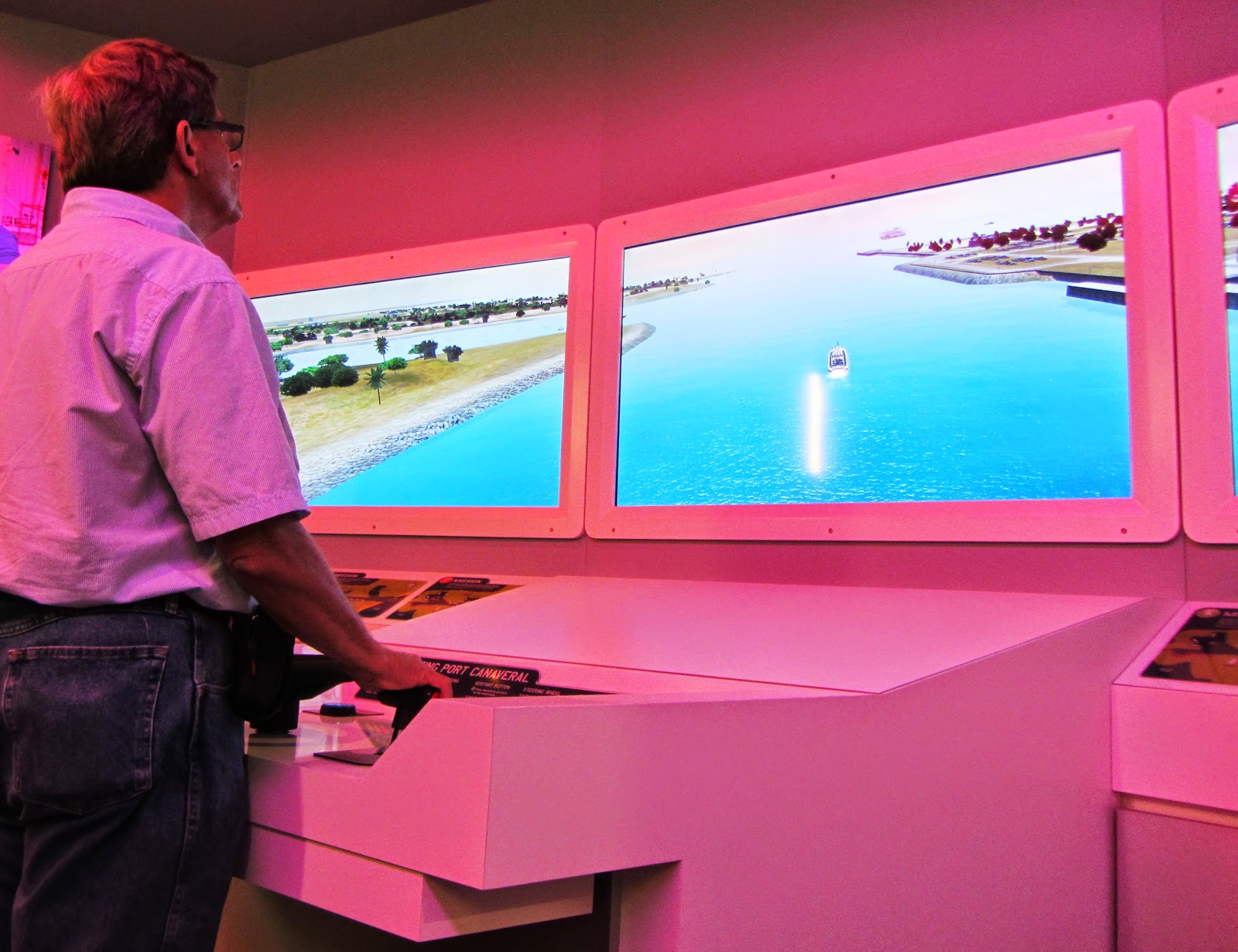 One fun thing we found inside the EC was the docking port PILOT Simulation Trainer. I did NOT sink anything, or run into anything, or anything!!

The Exploration Center is closed to the public this Thursday morning, though, when the Orion takes off.  Its been rented by ULA (United Launch Associates) one of several competing private rocket and space ship builders, for their employees to watch the launch (with a catered breakfast on floor 6).ULA is seeking to develop the space market for industry.  Check it out online; one project these guys want to take on is to lasso an asteroid, put it in orbit around the moon, and mine it. 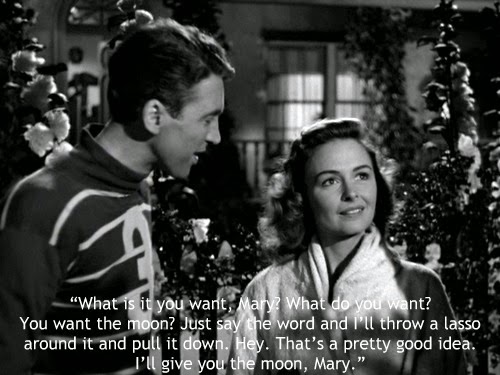 Remember the movie?  That may be next! 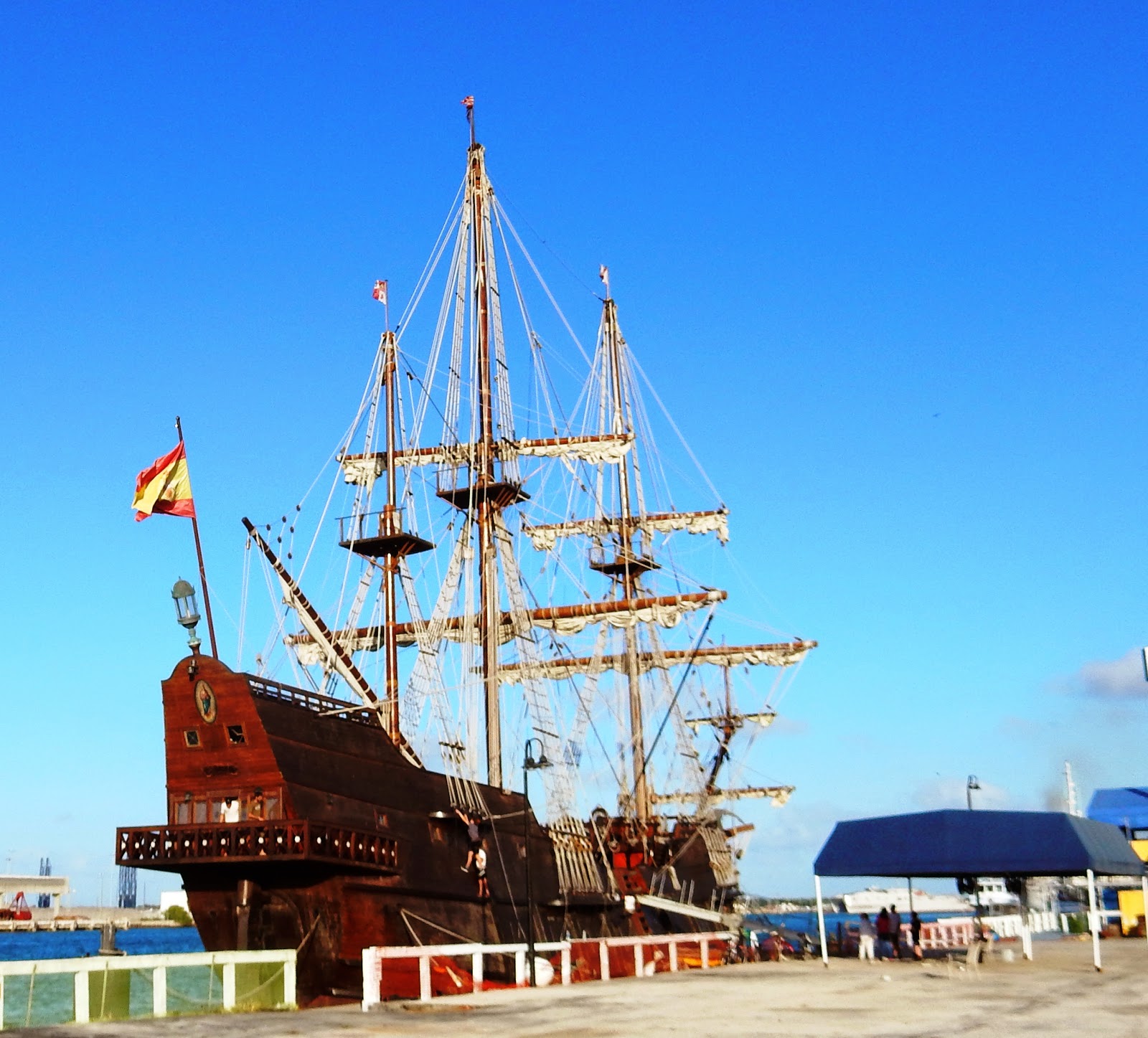 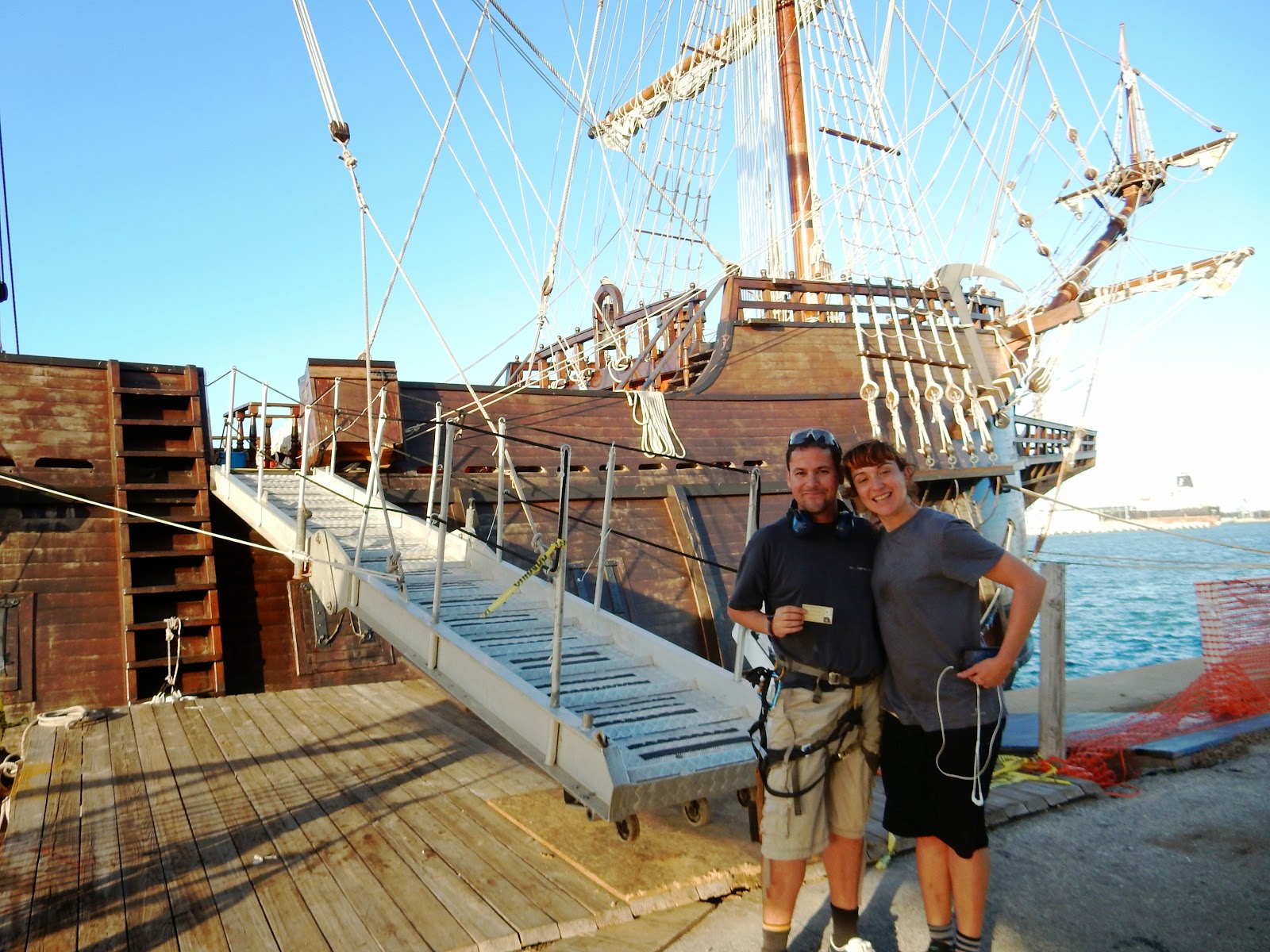 The El Galeon, a Spanish full size square rigged sailing ship, has been in port for two weeks but leaves tomorrow for Fort Lauderdale.  Two of the volunteer crew who were preparing her for departure let me take their picture. Jesus and Cristina and the rest of the crew are learning how to sail this ship from one end to the other. What an
adventure. 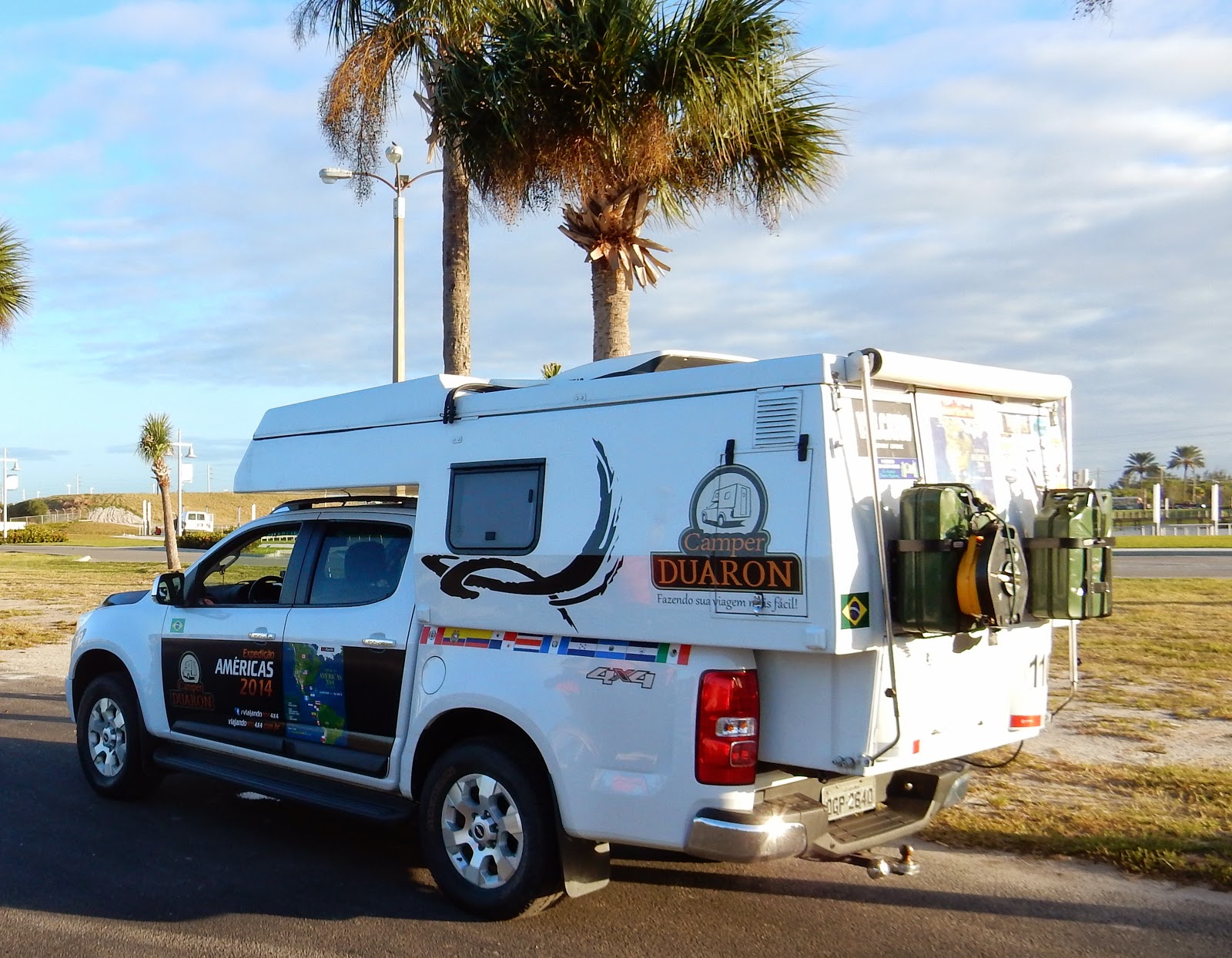 And speaking of adventures! I turn from the El Galeon to return to the Exploration Center and Mona, who is tapping her fingers waiting for me to return from wherever I’ve gone off to now, when I almost bump into a cool pickup truck with fascinating markings, and some kind of pop-top roof.  Its an RV!  And the license place is BRAZIL. 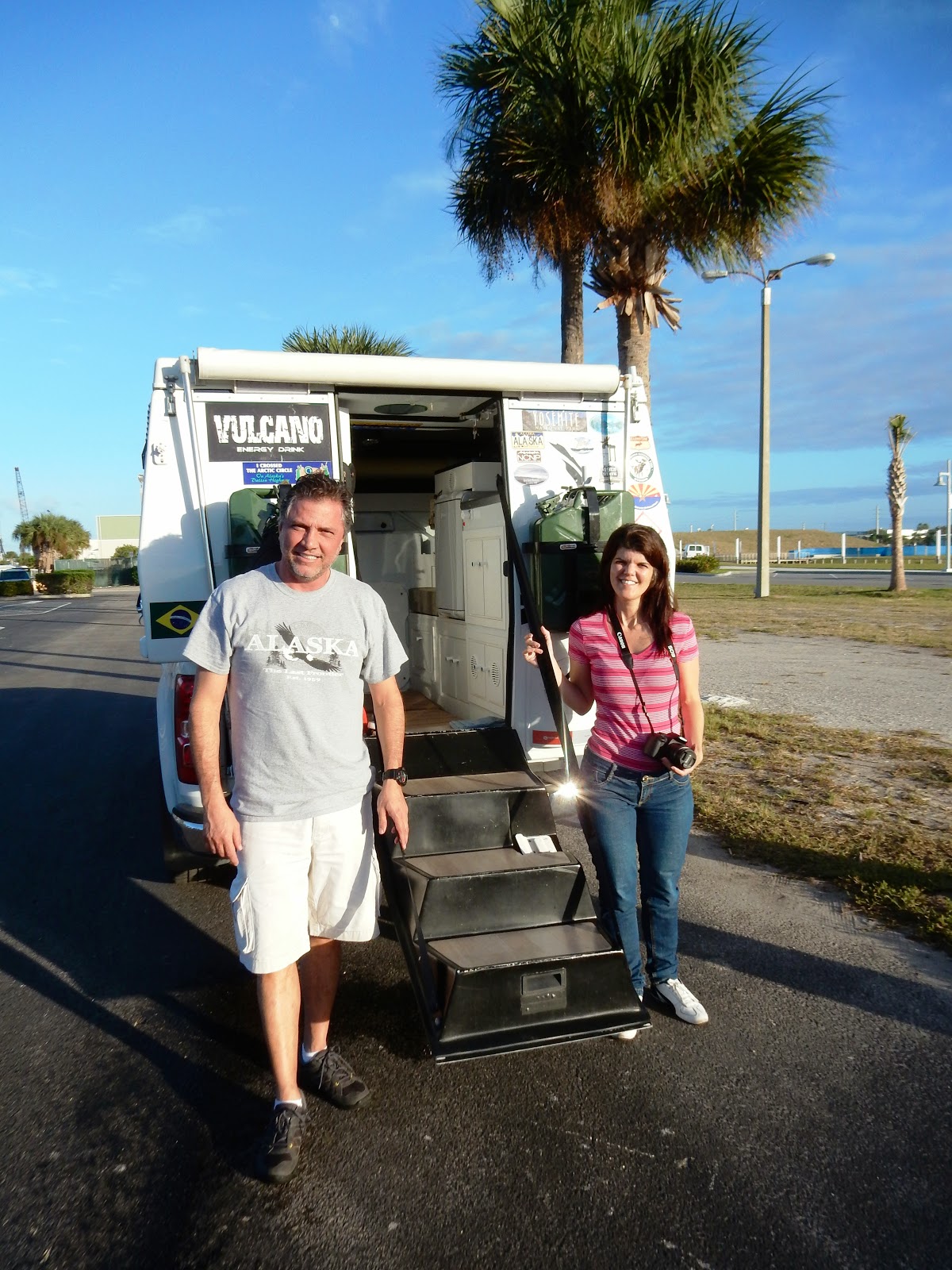 Amando and Joselle are from Brasilia, the capital city of their huge country. They have partnered with the maker of this RV to complete a circumnavigation of all South and North America and are heading home now.  In fact, they expect to be back in Brazil in two months.

They own a Pizza Hut franchise at home and Pizza Hut is also sponsoring their trip.  Check it out on Facebook at viajandonos4x4. Oh, to be young again!

And they say they have had no problem with kidnappers, gang bangers, or thieves anywhere in Central America on their trip north.  But I will keep them in prayer as they travel back. Going south they may look like Americans. And they don’t speak Spanish!  Of course. They speak Portuguese. 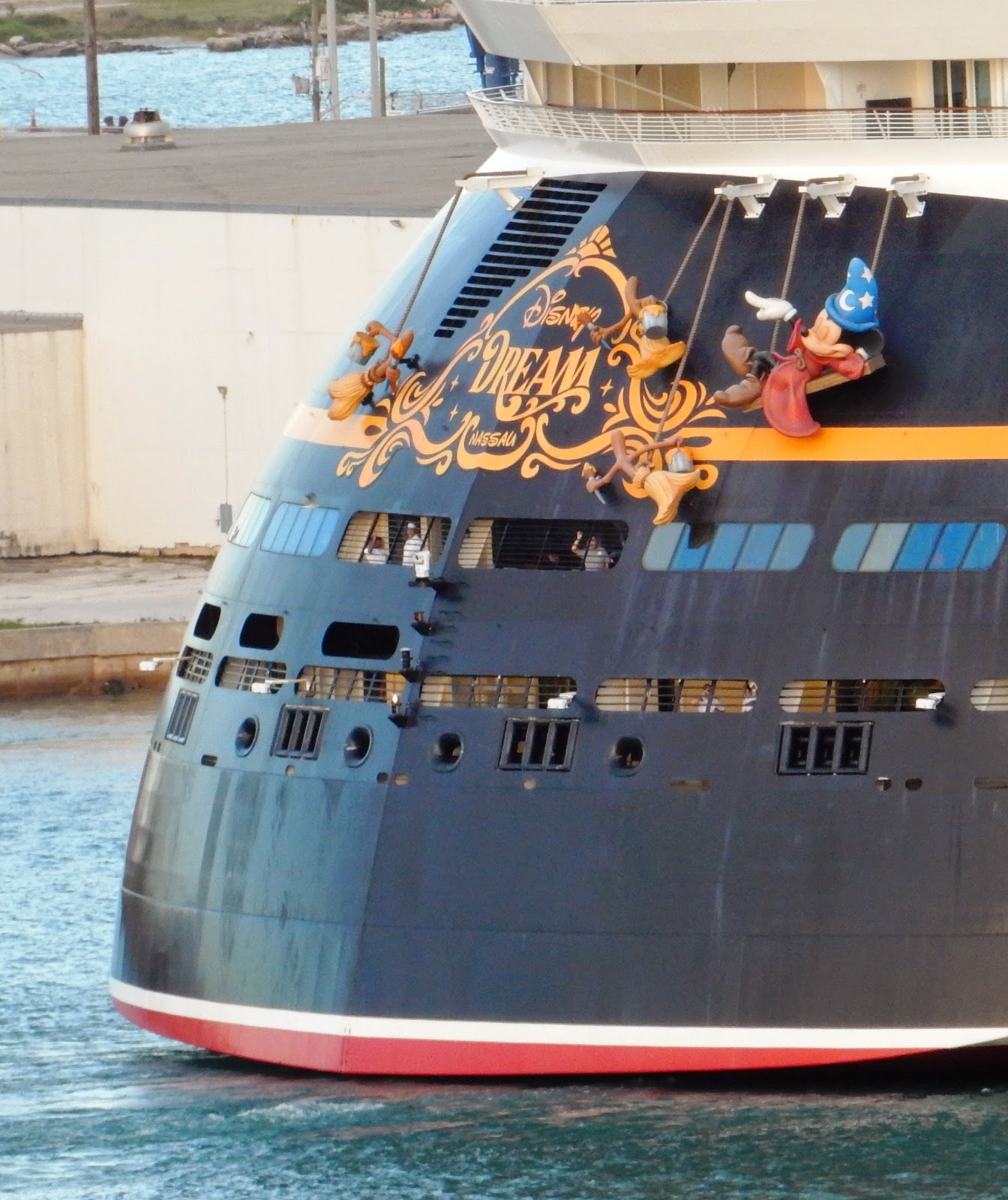 From the top of the Exploration Center we watched the Disney DREAM head out for a four day cruise.  I didn’t know they had a water flume ride between the smoke stacks!  And the air horn announcing their departure gives the first few notes of the song, “A dream is a wish your heart makes’. COOL! 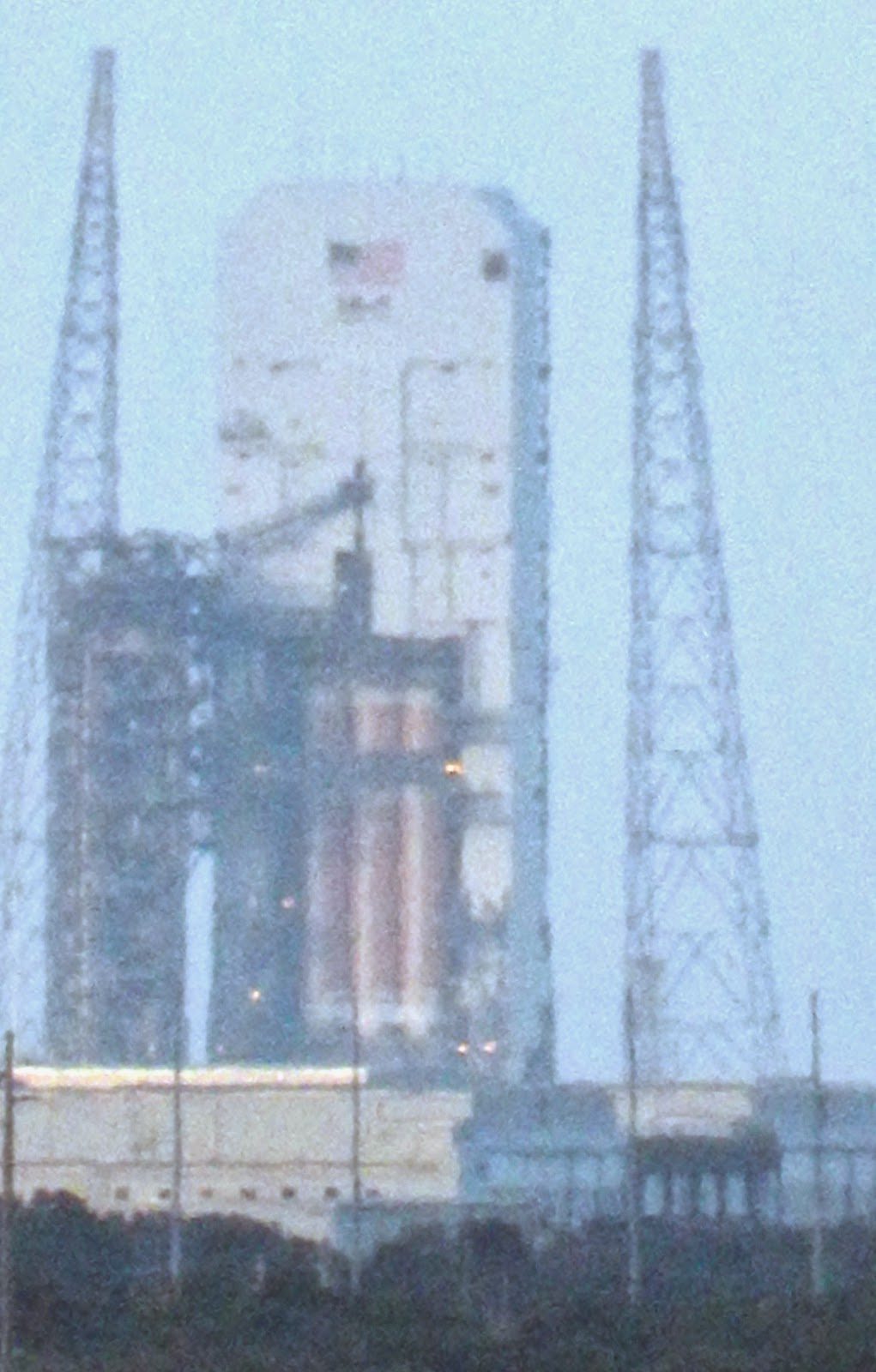 And from that seven story deck you can see not only the nearby launch gantries, but pad 37, with the Delta 4 HEAVY (three main engines- they are the orange tubes) ready to fly Thursday. The Orion capsule assembly is in that building with the American Flag on it atop the rocket. 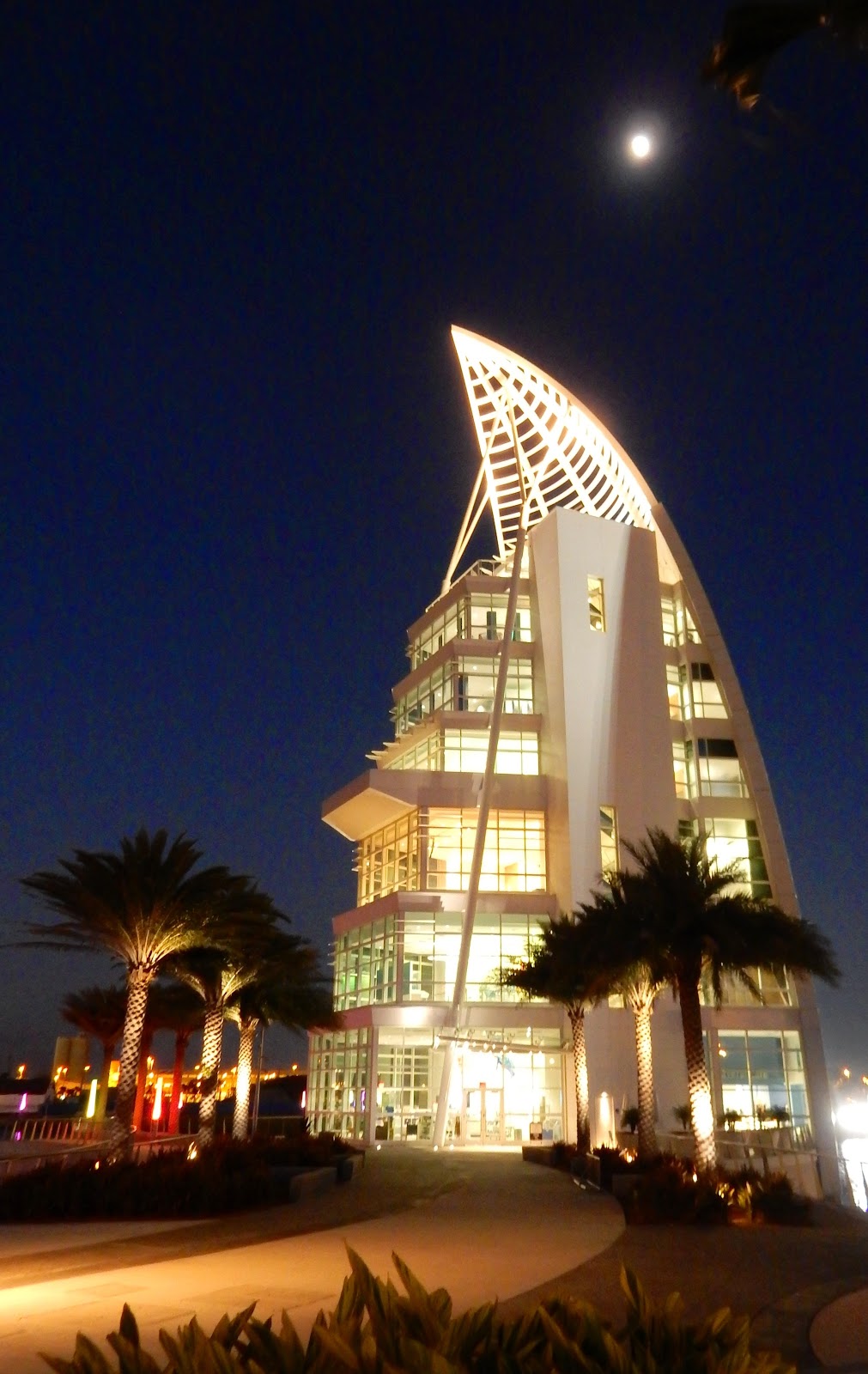 Home bound after sunset and the Exploration center certainly is photogenic, regardless of what is, or isn’t, inside it to see. 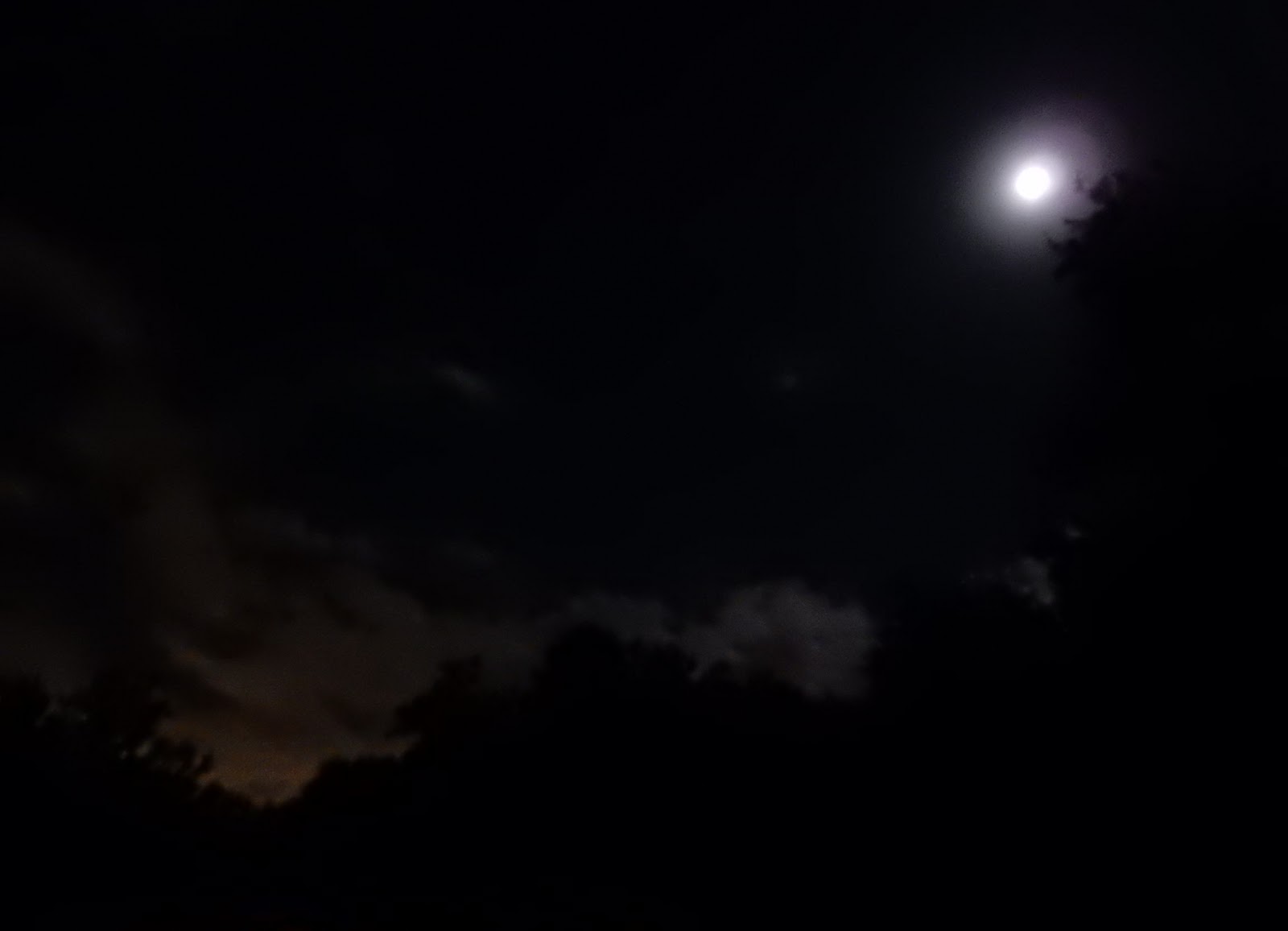 We return home by 7 and the moon is bright above.  But the launch pad lights are on over at the Cape too.  And they light up the low clouds with an expectant orange glow.

T minus 3 days and counting.