Botany Bay was closed.  No, not the Australian Penal colony. Rather the wildlife preserve made up of two 18th century plantations just across the wetland waterway from our campground.  “Closed for Special Hunt” the sign read. Special hunts are called for as needed at all wildlife areas here in South Carolina.  That’s how they keep the wildlife populations matched with the food supply, or try to.

So we headed a bit farther west on route 174 to a fresh seafood wagon near Store Creek. We had our picnic lunch along so a basket of fresh shrimp, fries and hushpuppies filled the bill. 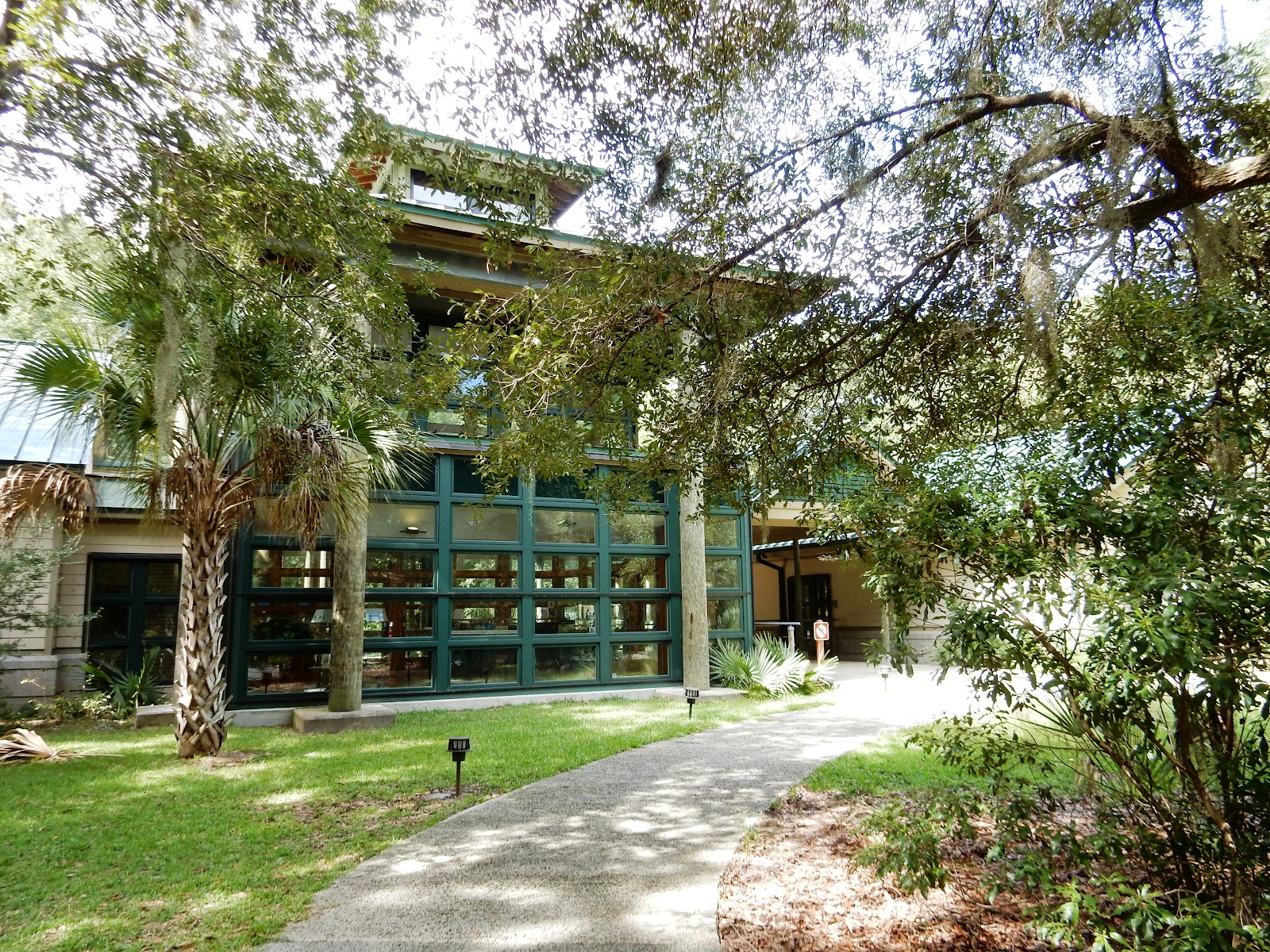 Then back toward the beach and south on Palmetto Road to the State Park Education Center. 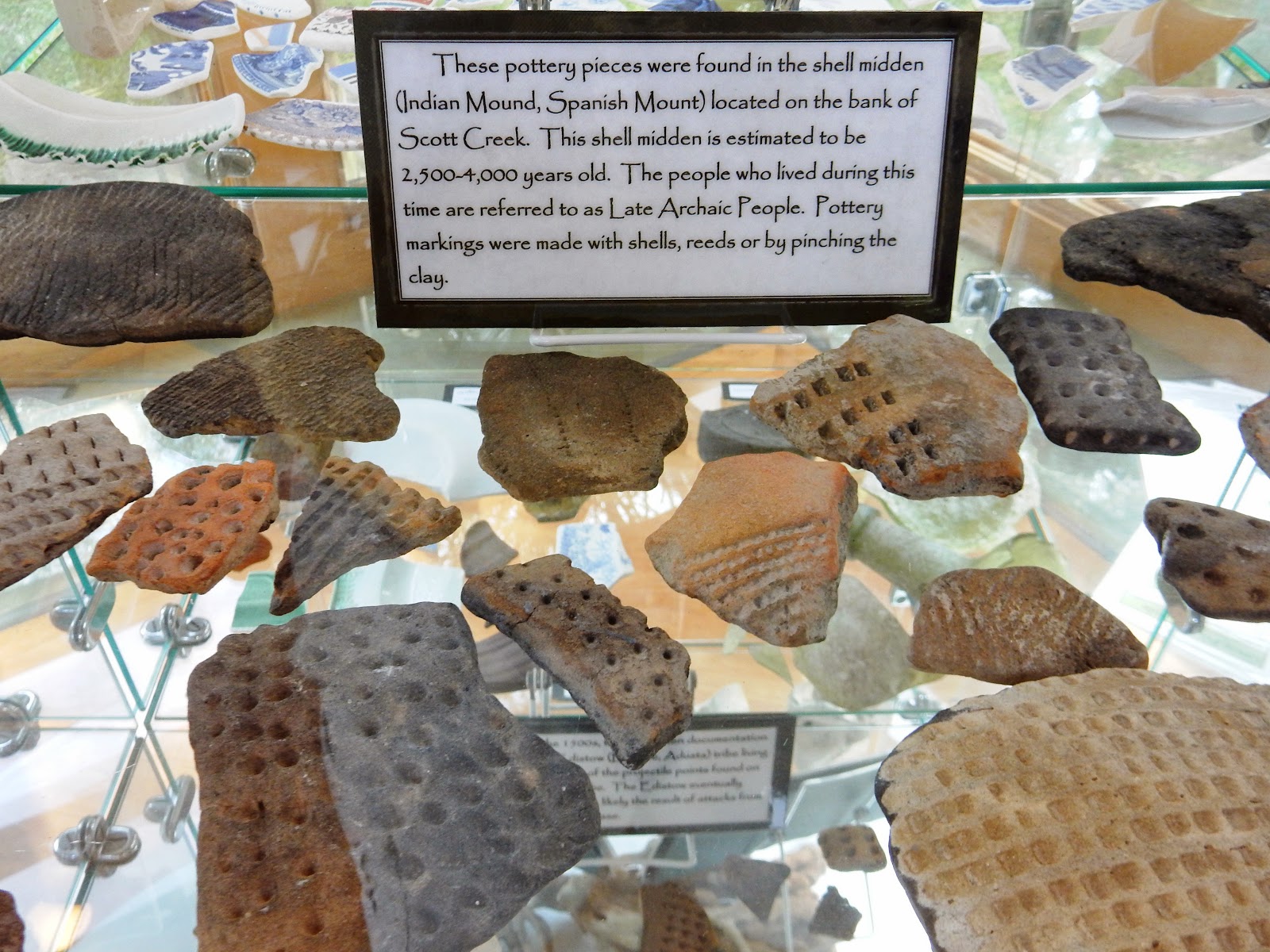 In addition to a nice nature center there are exhibits of prehistoric Indian and 18th and 19th century settler and plantation artifacts dug up by beachcombers and scientists over the years. 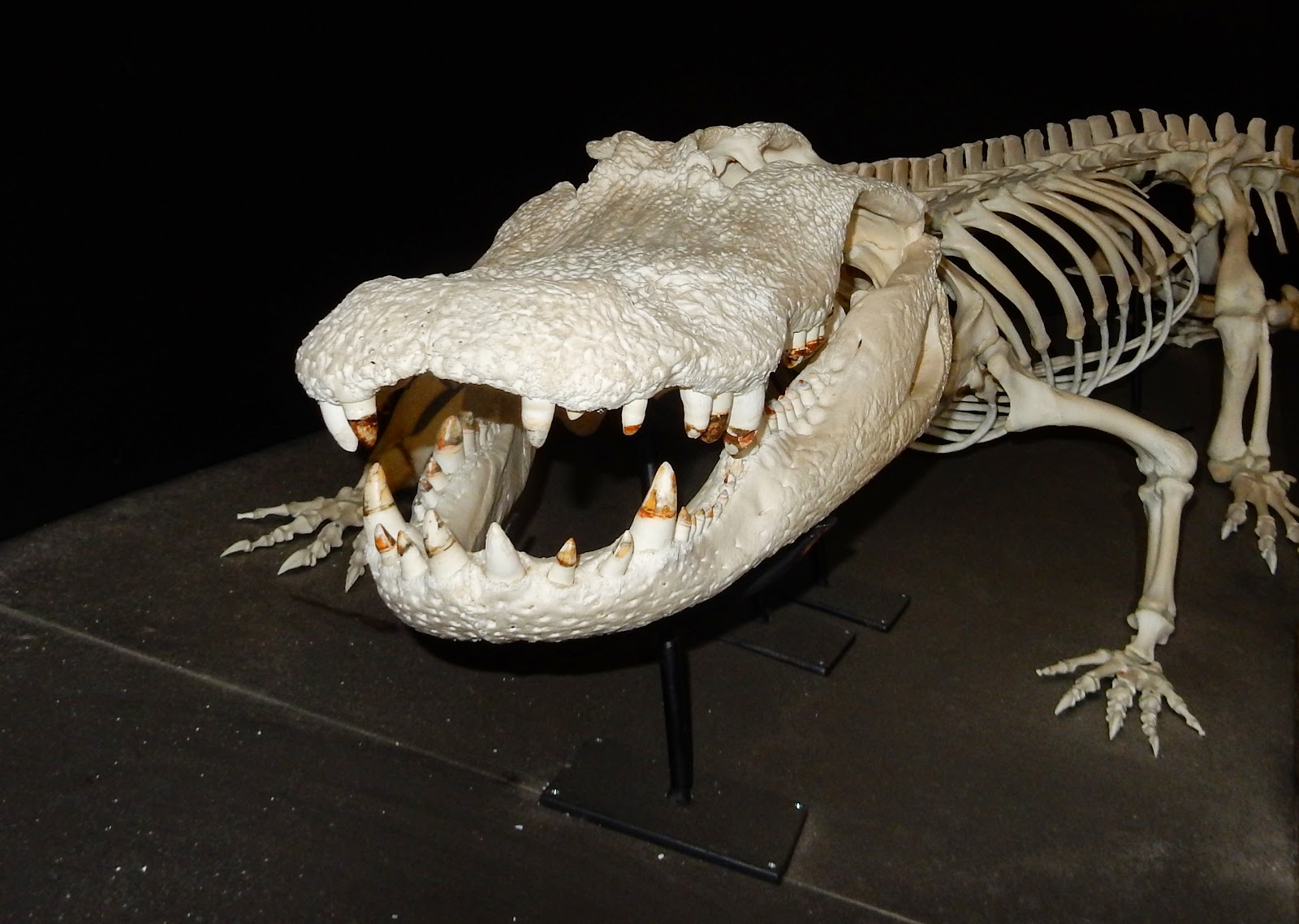 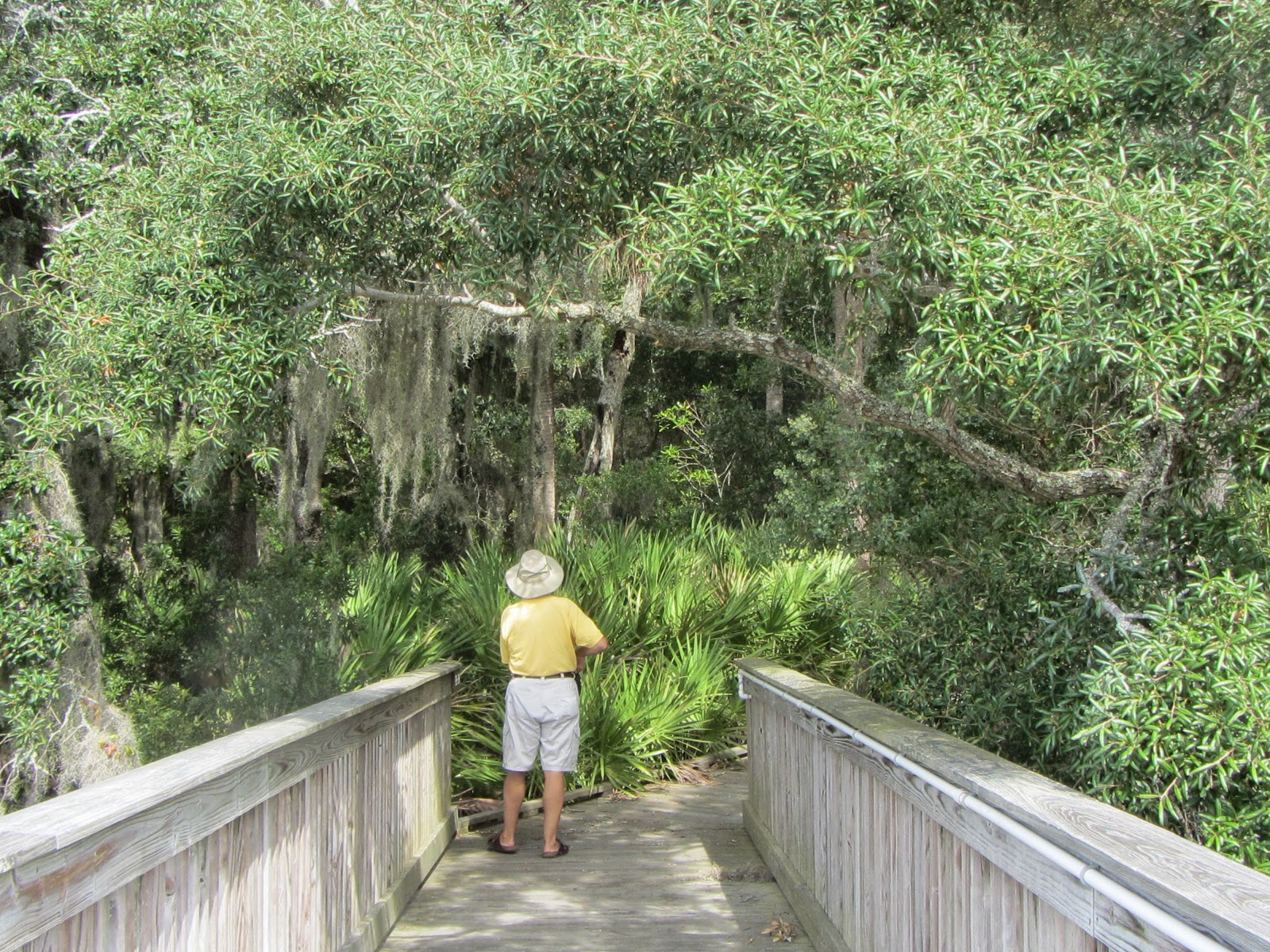 Outside are several miles of walks through and along waterways, swamps, and forests of loblolly pines, live oaks and palmetto palms.  “Don’t feed the alligators” the rangers in the Center told everyone.  We saw none, but then, I doubt we would have purposely gotten close enough to hand one some crackers if we had. 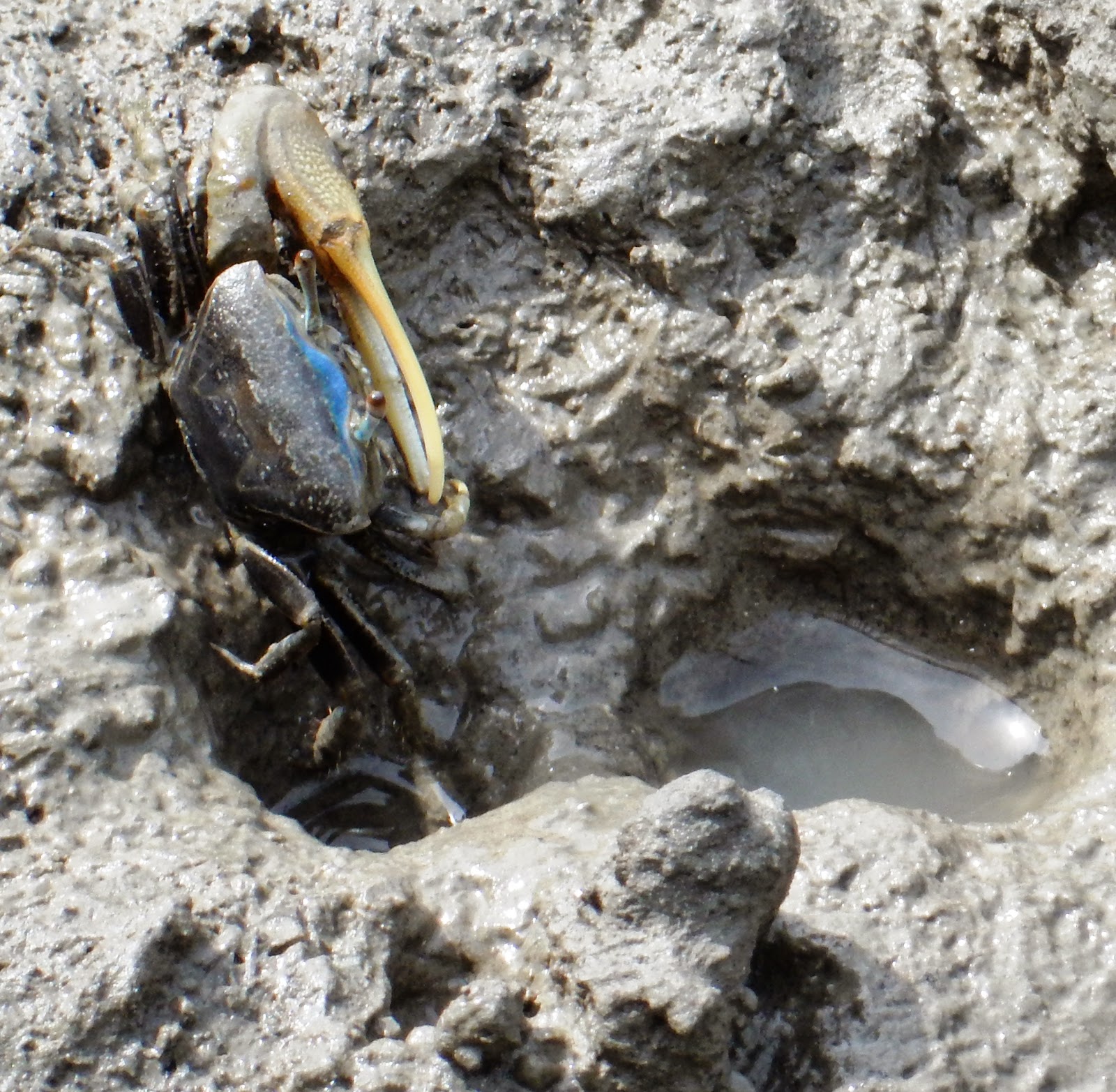 We took two of the shorter walks.  First, the one to the Center boat dock.  The tide was out so the ‘Plough’ mud was visible and the tiny mud crabs were scurrying about on the surface looking for food. 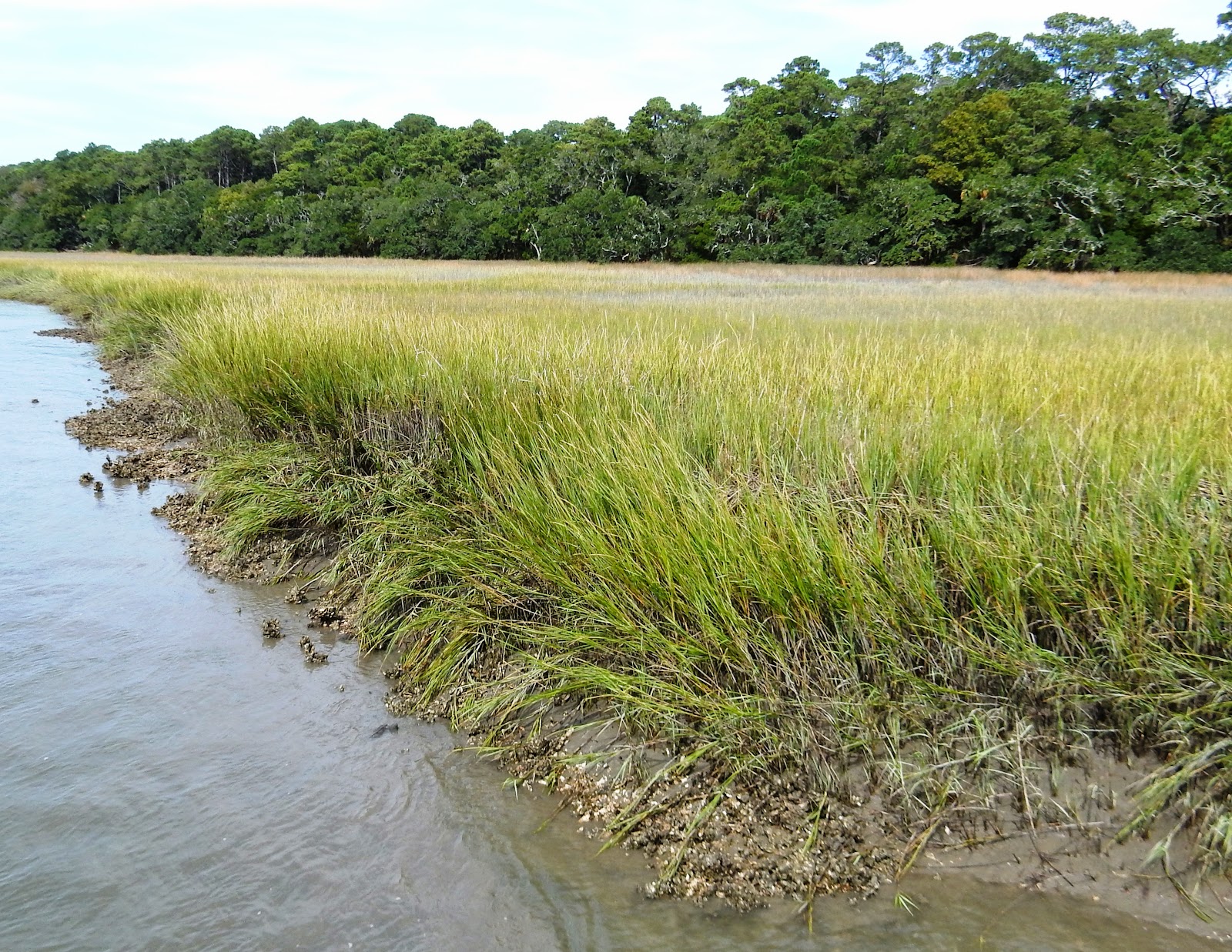 The oysters were also revealed. Oysters and shrimp are the staples of the low Country diet, along with white fish of several delicious varieties.

When the tide rolls back in these beds will be well below water and safe for 12 hours from seagulls again. 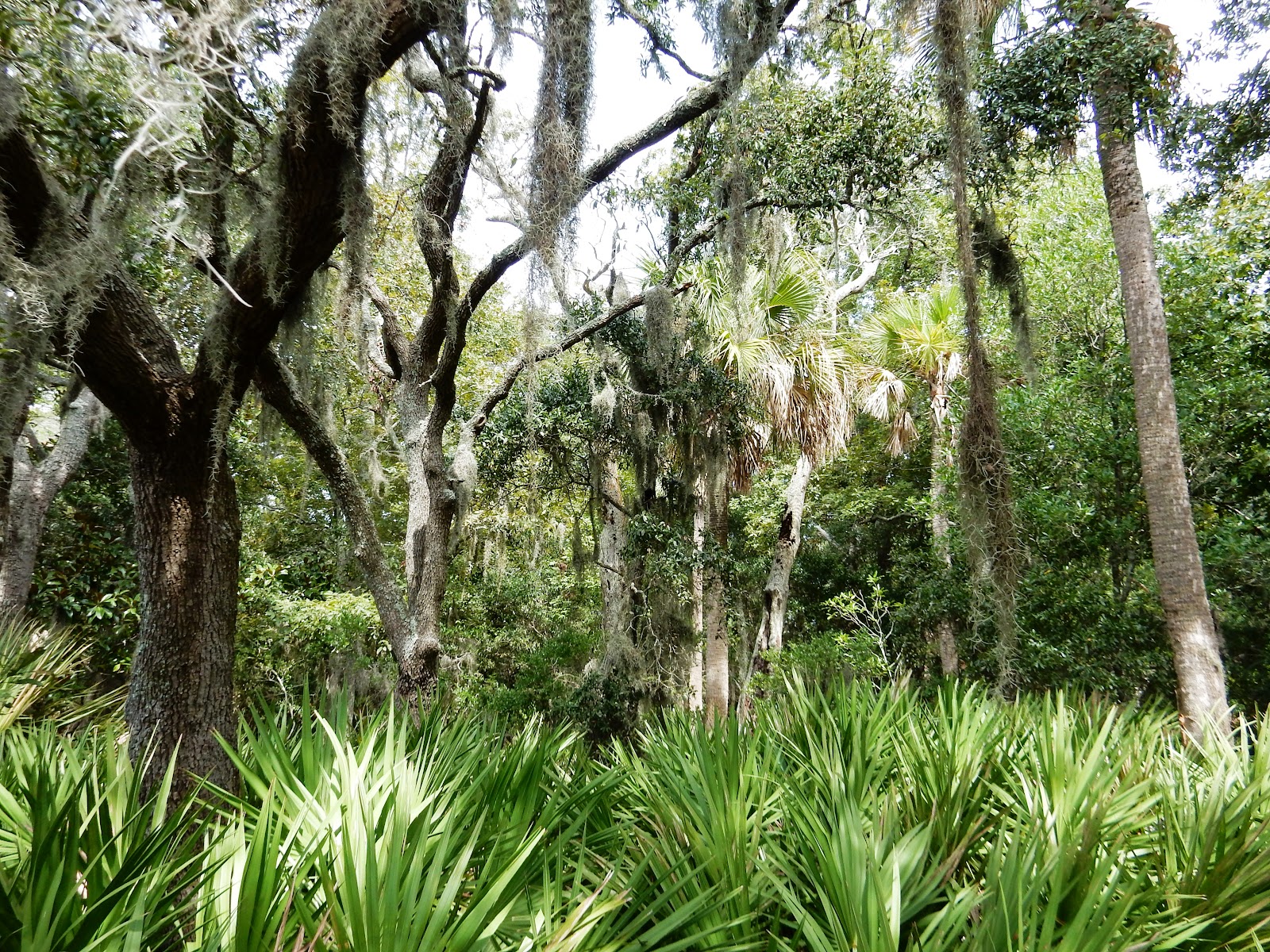 The second walk was historical as well as naturally beautiful.  In the 1840’s Alexander Bache, a grandson of Benjamin Franklin, led a US Geologic survey of the Southeastern Coast of the US and began it here on Edisto Island.  Edisto was considered the most level of all barrier islands, hence the best first place to get a line of sight for the base line by which all other triangulation's of measurement would be taken. 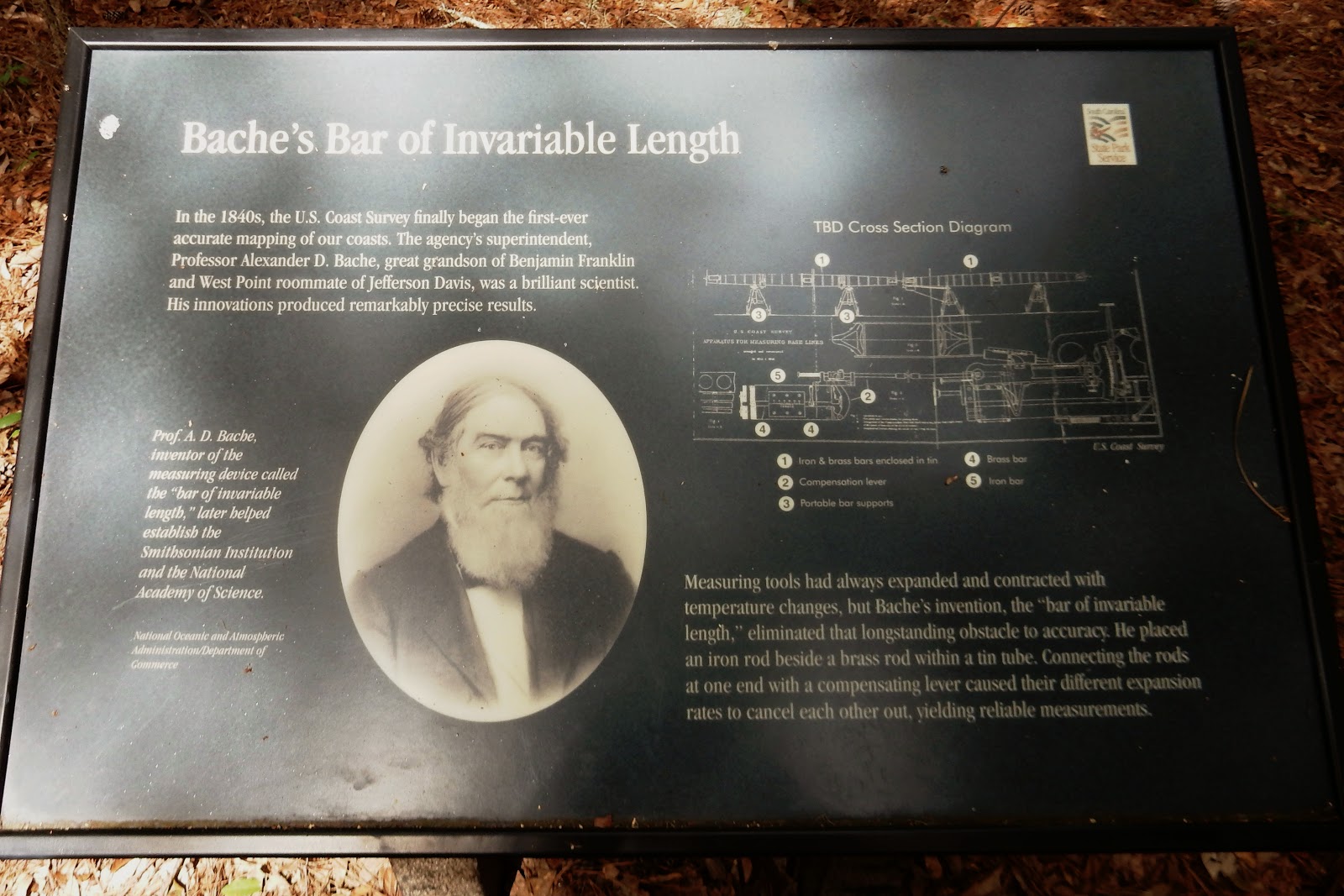 The New England granite markers at each end of the nearly 7 mile base line still stand where he placed them in 1849, and this one is marked by this historic trail honoring him and all of the men white and slave, who worked to make the coast more safe with accurate measurements for local and international shipping. Little did anyone know that just 12 years later these measurements would allow Confederate blockade runners to sneak easier through the islands to there home ports, and Union gunboats to edge into shore to support landings that would remove most of the barrier islands from the Confederacy early in the conflict. 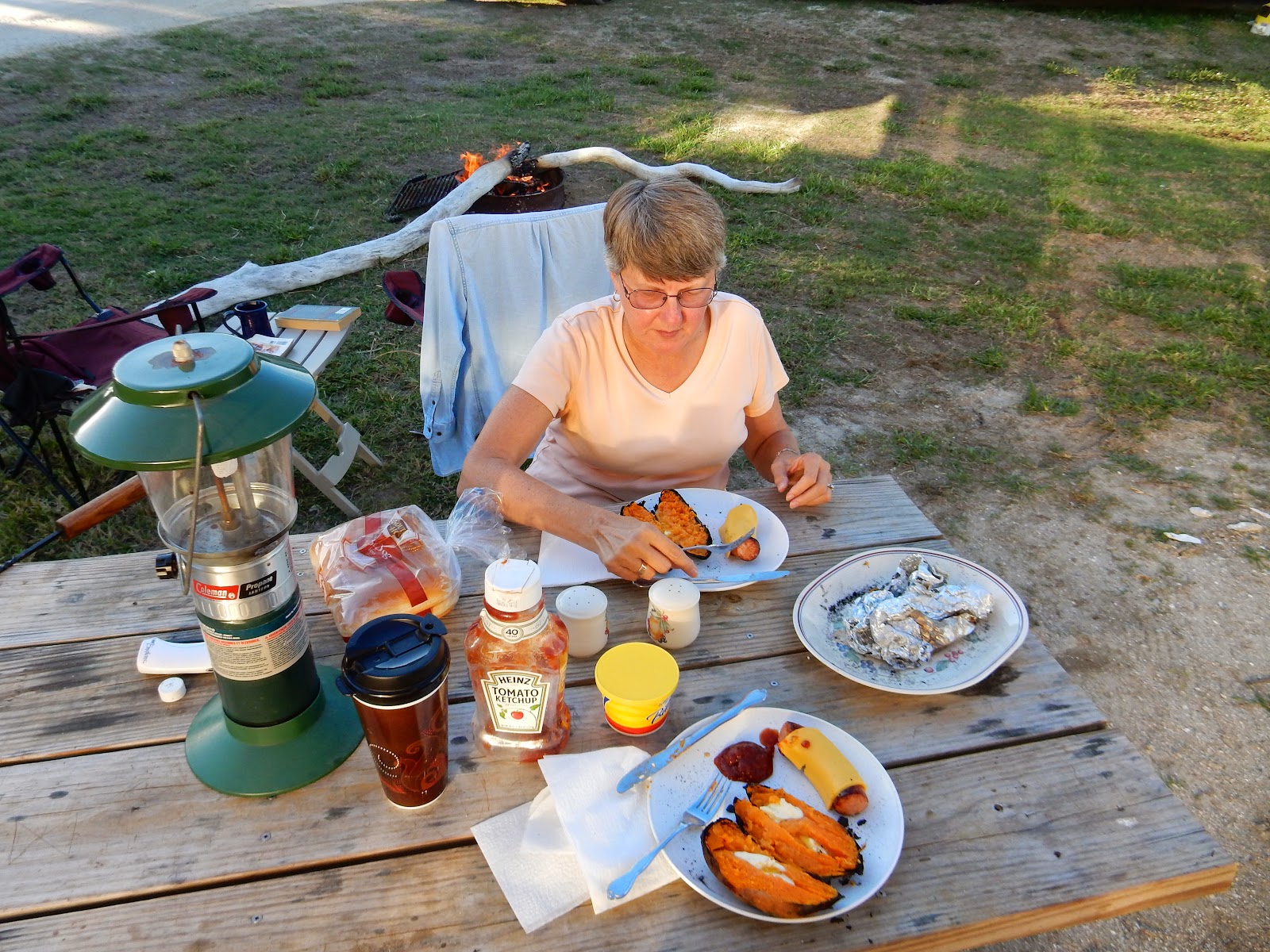 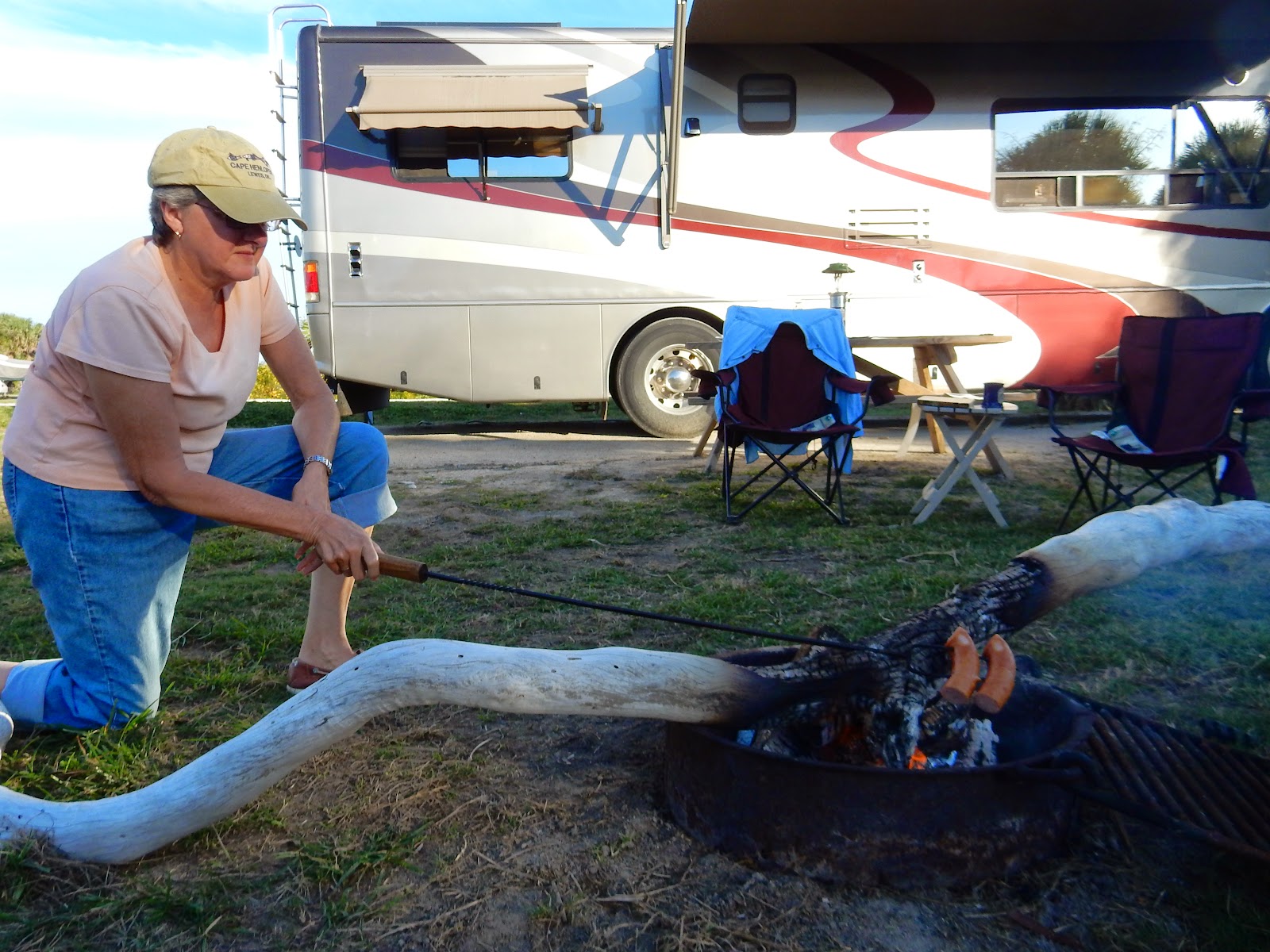 Back to the campground and onto the beach once more for a bit of splashing and reading.  But today was cooler and windier than the past two so we headed to camp and started a fire.  Mona cooked Sweet potatoes in the fire and kielbasa on it.  Um, Um, GOOD!


It’s darkening now.  I’m sure the sunset at Bay Point was wonderful tonight. We enjoyed the colors of the sky through our campground palms from our campfire.

Tomorrow we check out of here and try to fit FROG’s 13’ height under the live oaks at Edisto UMC.  If it doesn’t work out, we’ll decide what to do from there.  NO DEADLINES!  Except…

… The Confederate submarine Hunley restoration museum in Charleston is open only Saturdays and Sundays, and we just read in this week’s paper that the ALL CHARLESTON USED BOOK SALE is taking place this weekend at the Shrine Hall.  No deadlines, but definite destinations for Saturday!